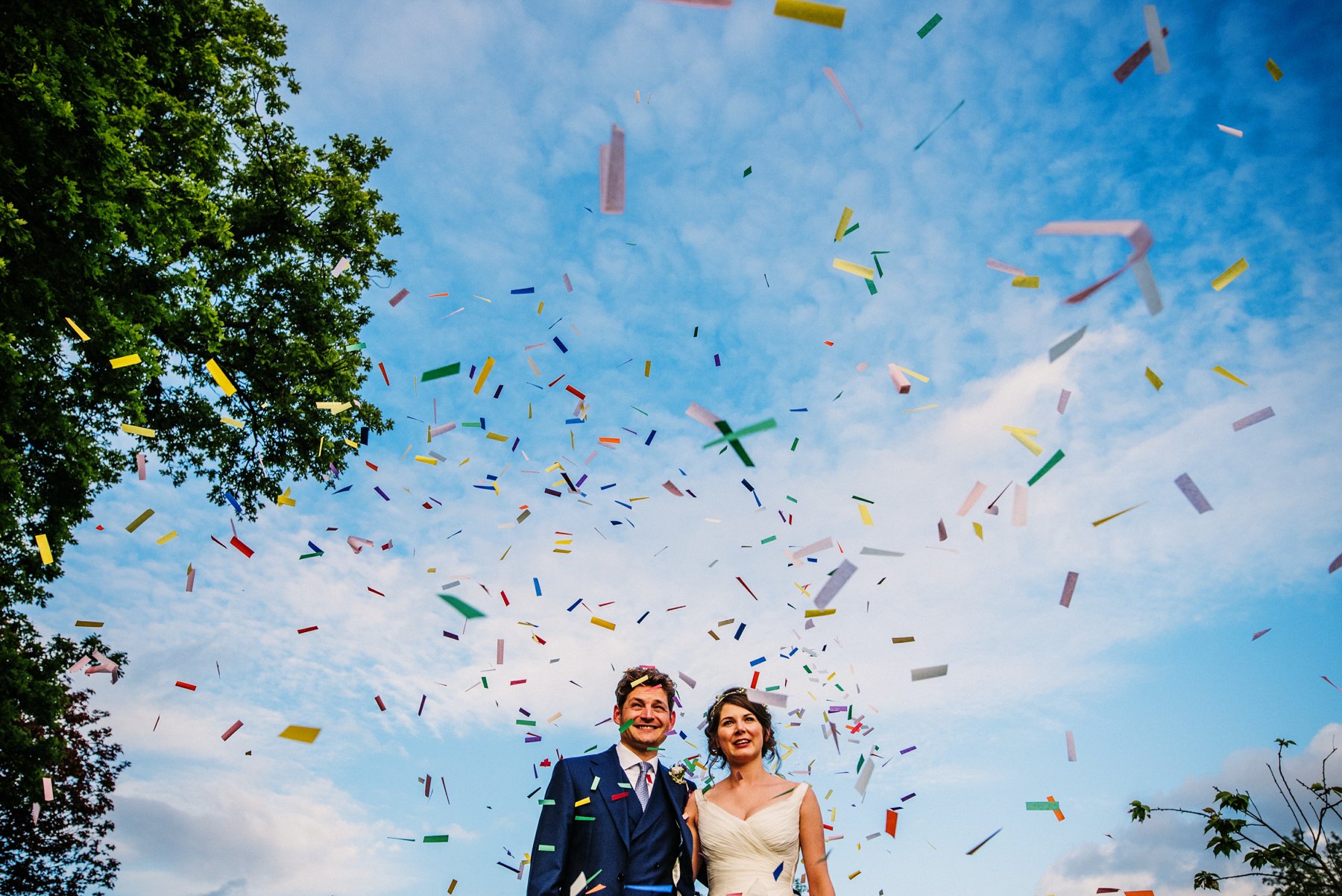 I can take or leave many wedding traditions but one I absolutely adore is the throwing of confetti and creating confetti wedding pictures.

None of this leaving-it-to-the-older-generation-to-throw-small-handfuls-of-horseshoe-shaped-confetti-they-bought-with-them either.  As far as confetti goes more is more.  Buy what you think you need and then double it.  And then add a bit extra for good measure.  Seriously, there is nothing more frustrating than a small puff of confetti vanishing in the wind.

I thought I’d share a few of my favourite confetti images and the types of confetti that was used for each image and how I photographed it .  I’ve also included a link to my confetti ideas Pintrest board below for more inspiration, including having a confetti bar, which I think is genius.

Here are some of my favourite confetti wedding pictures. 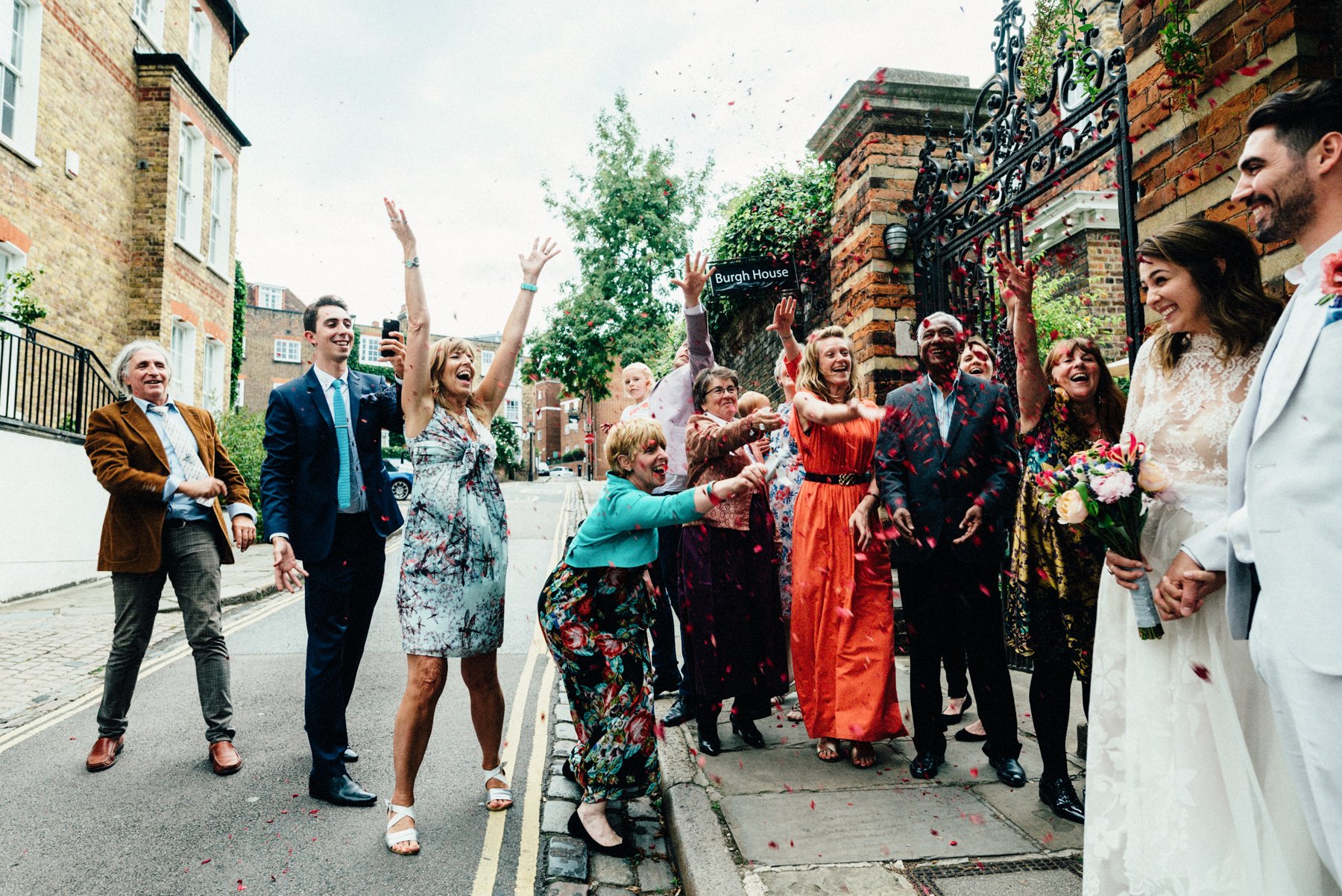 Guests throwing dried rose petal confetti at Danielle and Konrad’s Burgh House wedding.  This was photographed in a documentary wedding photography style, as are the majority of my confetti pictures. 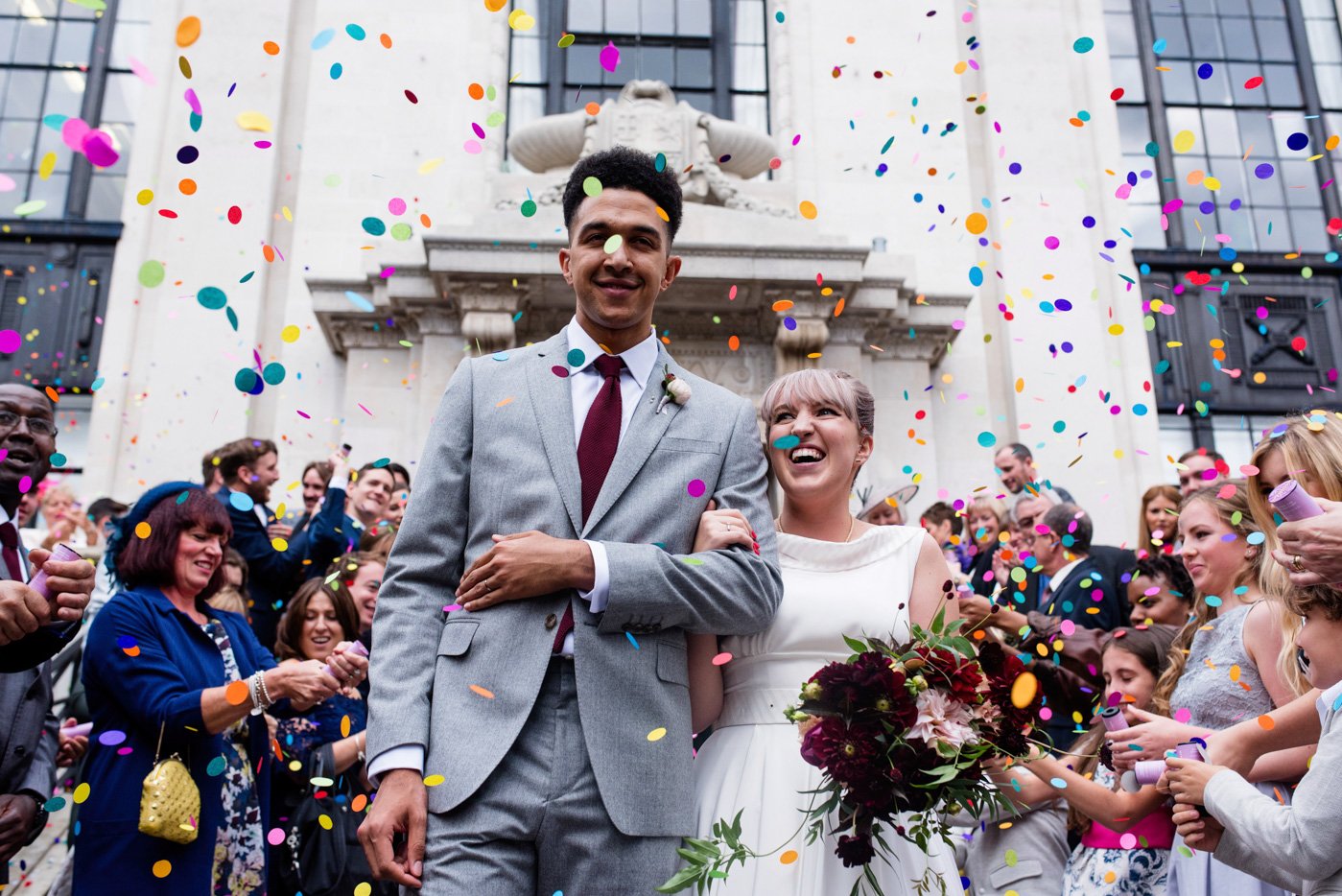 Saira and Jim’s guests were given confetti push-pops with these colourful circular confetti disks inside.

A mixture of plain and colourful confetti at Hayley and James’s Akamba wedding.  We stopped at the end of the path outside of the church so guests could throw confetti and a bridesmaid could fire a confetti canon.  I love the vibrant colours in this image. 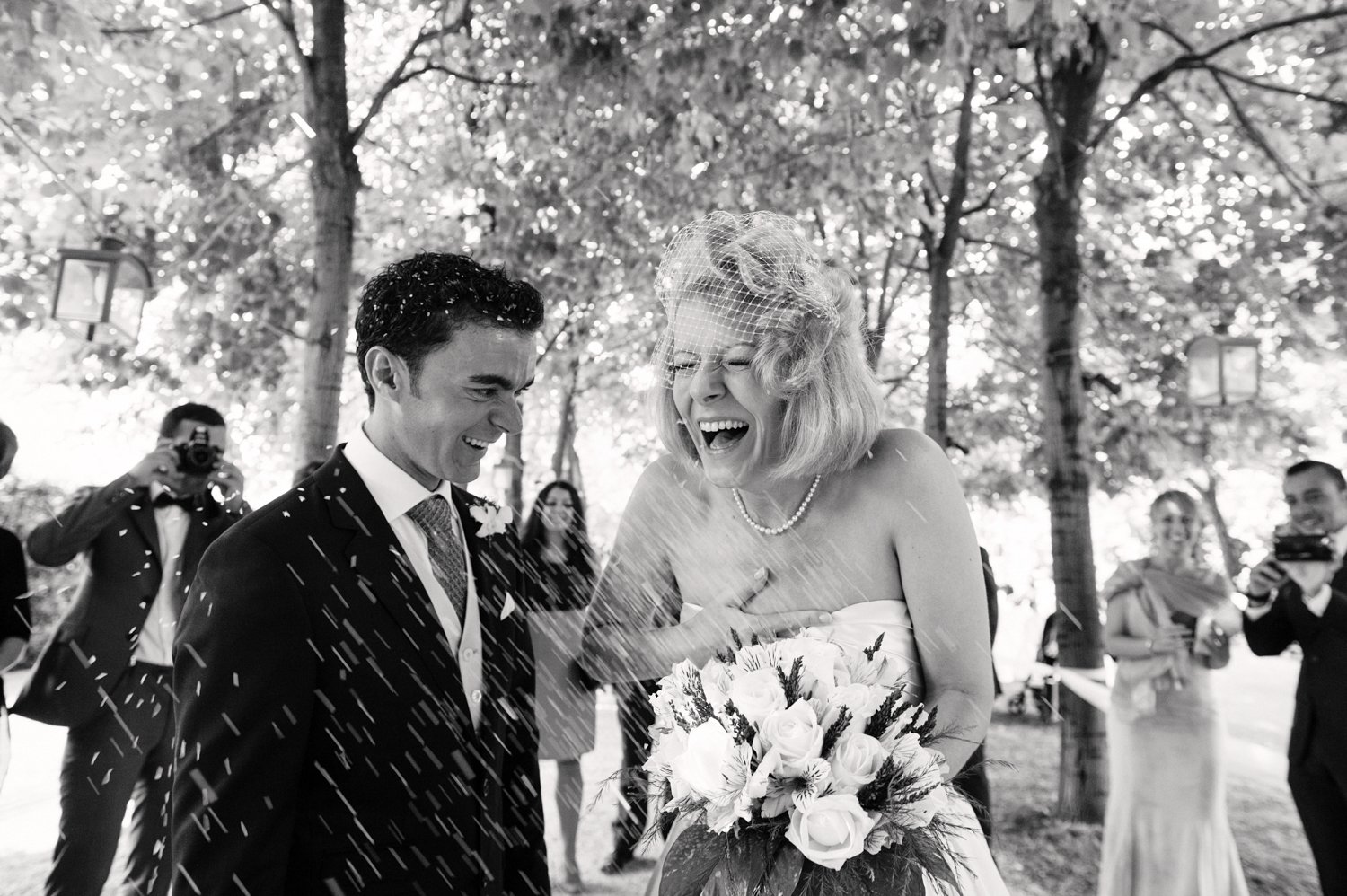 Pelted by rice at Kate and Davide’s Sicily villa wedding.  Alice captured this in a reportage wedding photography style and I just love the expression on Kate’s face.  Rice can be pretty brutal, so that’s something to keep in mind!  You’ll probably be picking it out of your clothes all day too! 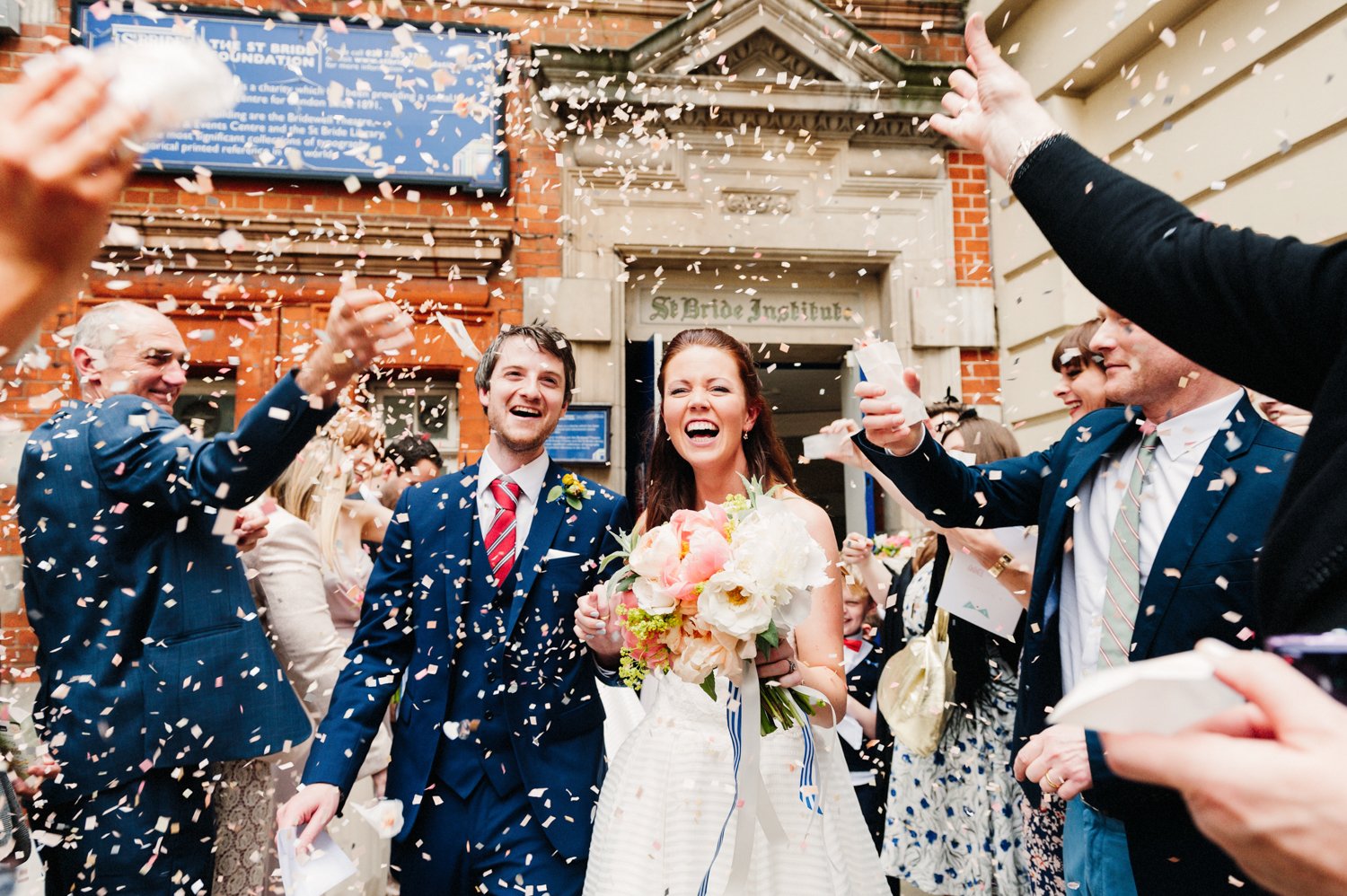 Peach and white confetti squares at Katie and Tommy’s Trinity Buoy Wharf wedding.  This square  confetti has been really popular at weddings recently and it comes in an array of colours and sizes to match your colour scheme.  This picture was captured candidly by Alice as Katie and Tommy exited their wedding ceremony. 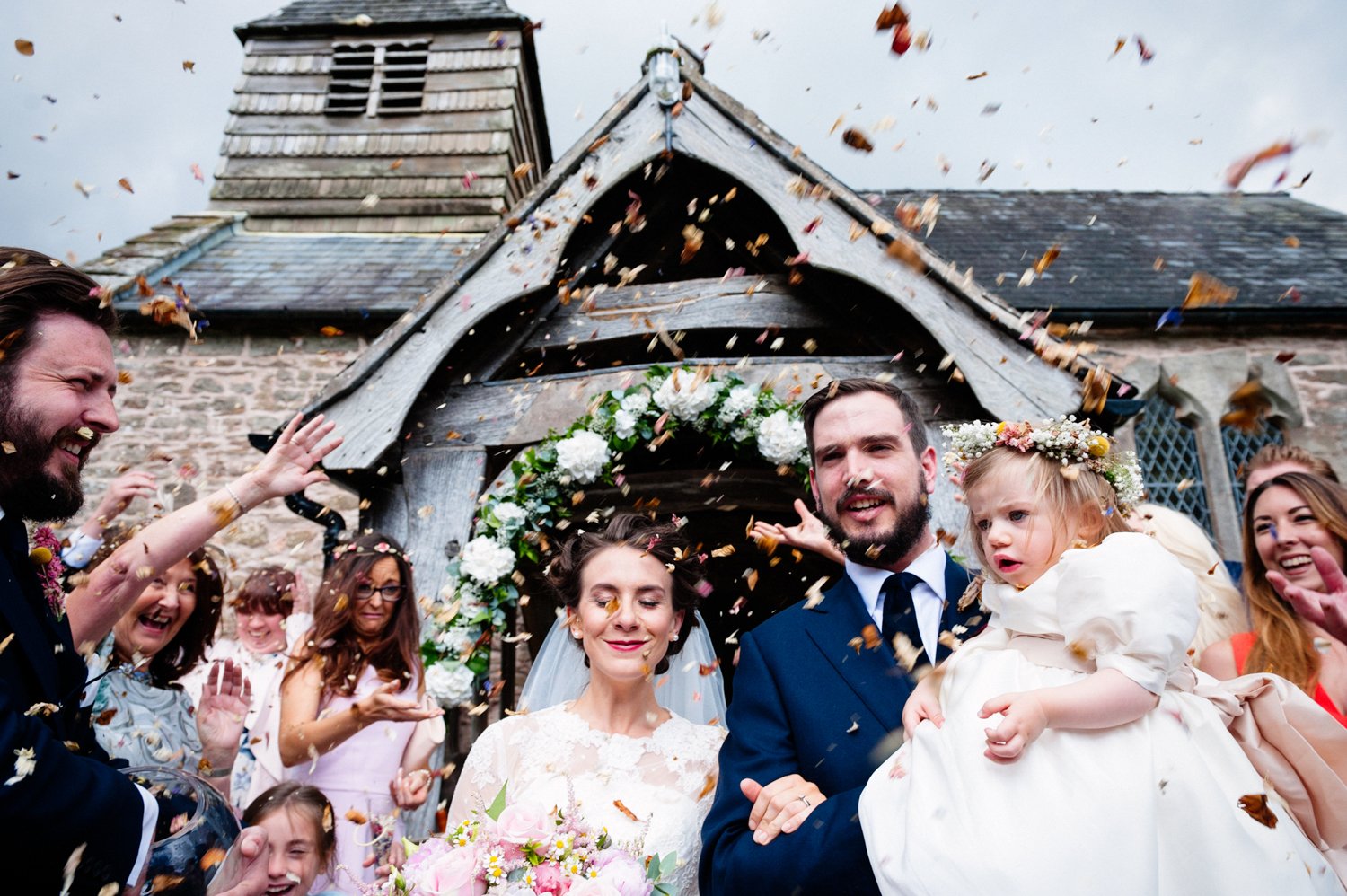 Mixed petals and confetti serenity at Lauren and Tom’s Dewsall Court wedding.  Dried petals smell devine but they’re not always the most visible in pictures.  Stick with bigger petals like roses and delphinium rather than lavender (another one that you’ll be picking out of your clothes for the rest of the day!). 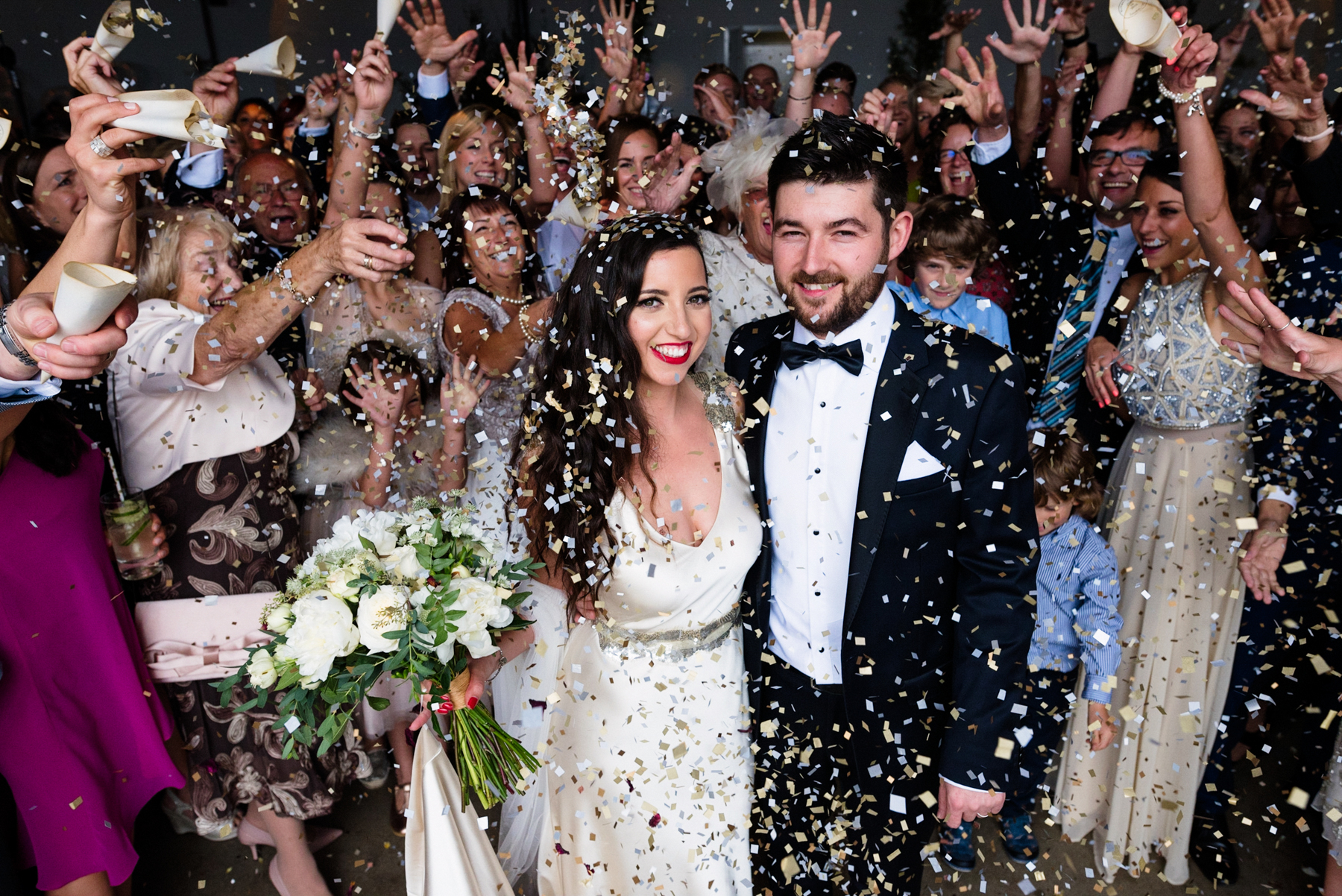 Industrial glam gold and silver confetti squares for Michaela and Luke’s London warehouse wedding.  This shot was set up in the entrance to the venue, as it was raining outside.  A wet weather plan is a great idea to make sure you nail your confetti wedding pictures even in bad weather. 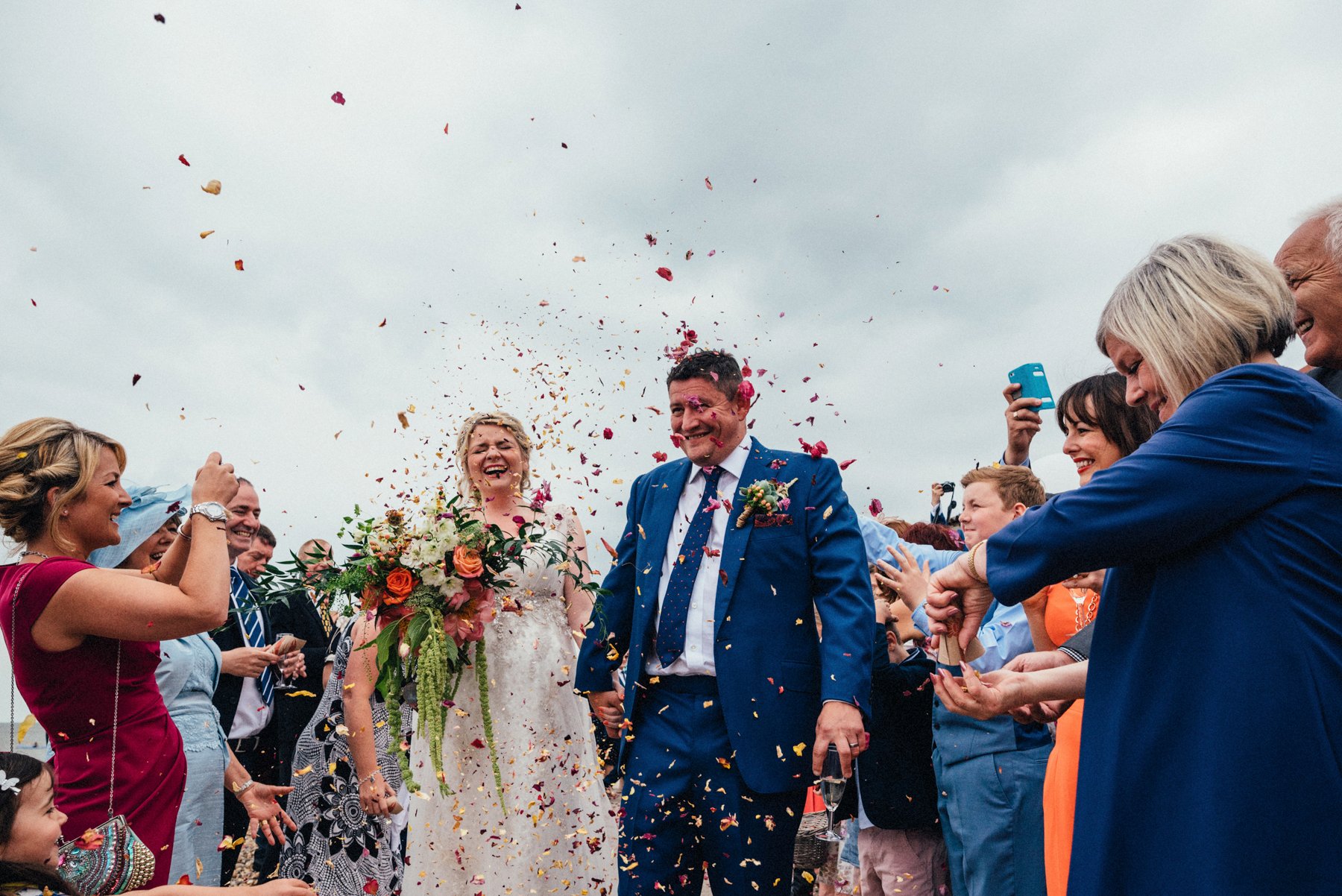 Mixed dried petals on the beach for Alex and Carly’s East Quay wedding in Whitstable.  This shot was captured candidly as Alex and Carly made their way down a line of their friends. 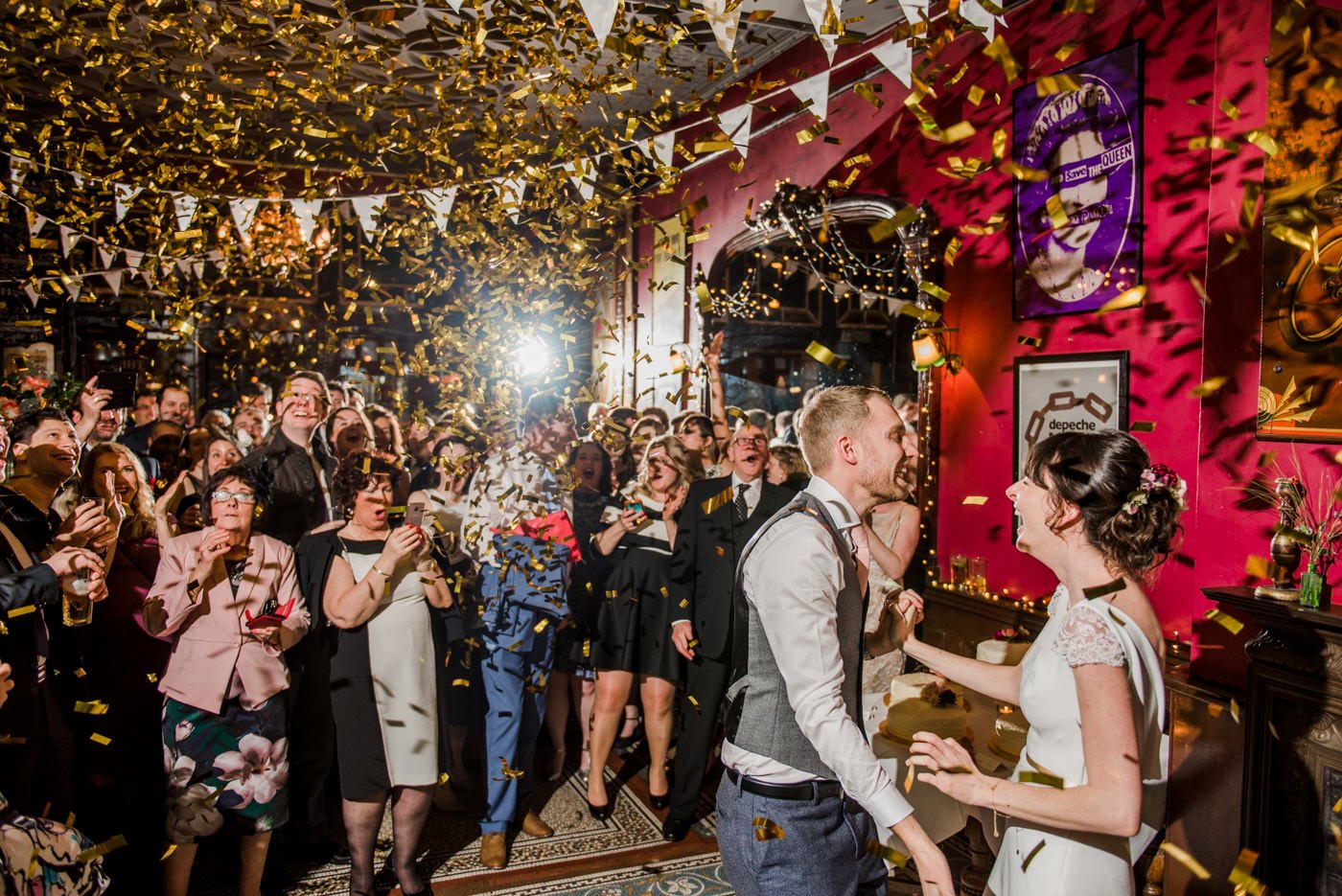 Dance floor confetti canons Confetti canons can make for a really interesting first dance picture.  You could even hire commercial canons so they go off mechanically and shower you in LOADS of paper. 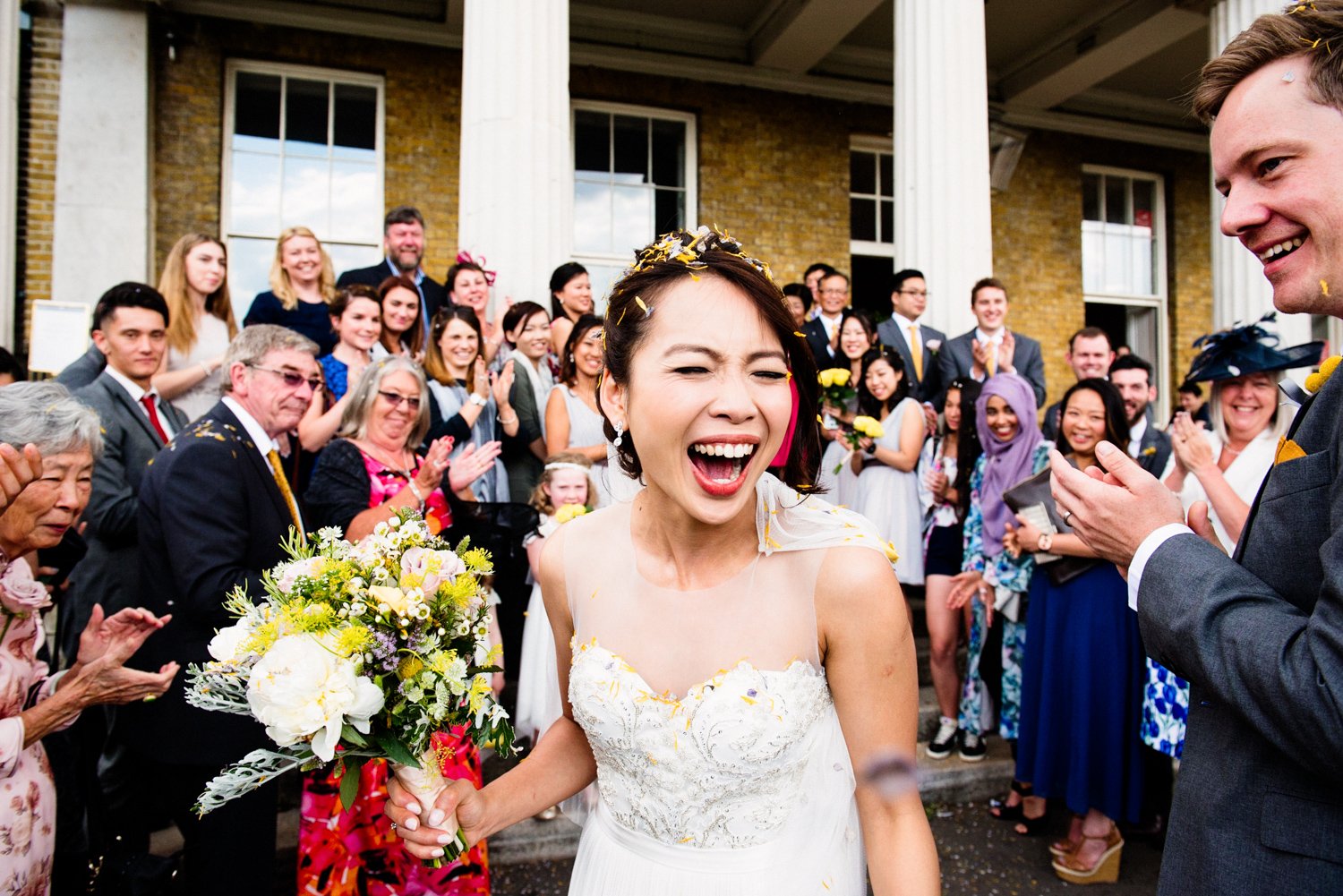 Dried petal fun at Maggie and Sam’s 6 St Chad’s Place wedding.  There’s no actual confetti in this one but I just adore the joyful look on Maggie’s face after she finishes running the confetti gauntlet!

Check out my Pintrest board for more creative confetti ideas!